An Energy Function is one of the most important tools for modeling a molecular structure. It provides a way to determine if a structure is favorable compared to alternate conformations of the structure. For example, a hexose molecule molecule can form the 5 conformations shown below. Each one can be scored in order to determine which is most likely to occur. Since the chair conformation has the best energy, it is the most favorable. 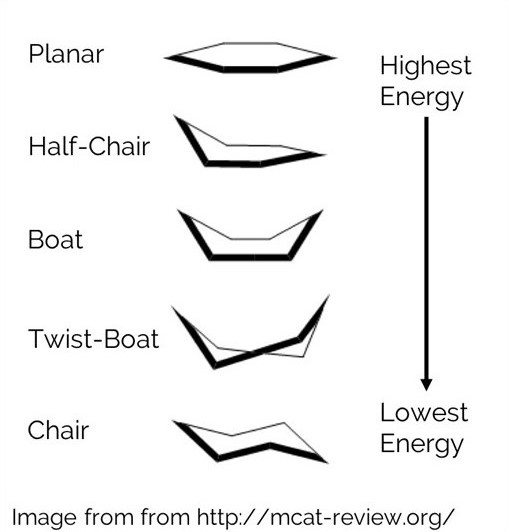 We use the Rosetta full atom Talaris2013 energy function to score protein conformations in Bench in order to determine which conformation is the most favorable. This combines energy terms that are both physics-based and statistics-based. The physics terms take into account the bond lengths/angles, proximity and types of atoms present, and sums up the physical forces for all atoms present. The statistical terms take into account the propensity of structural features found in nature. Statistical terms were gathered from structures found in the PDB and from other experimentally derived knowledge of molecular structures. The physical and statistical potentials are summed and reported on an arbitrary scale referred to as Rosetta Energy Units (REUs).

The energy score of your protein structure is not a measure of whether the structure can truly exist in vivo. It is a relative term that is not comparable across different structures that lack similarity. It is generally accepted that lower energy translates to a more favorable conformation than higher energy. While REUs cannot be directly converted into kcal/mol free energy, when calculating ΔΔGs of point mutations there is a strong correlation (up to 0.73) with experimentally determined kcal/mol (Kellogg et al). 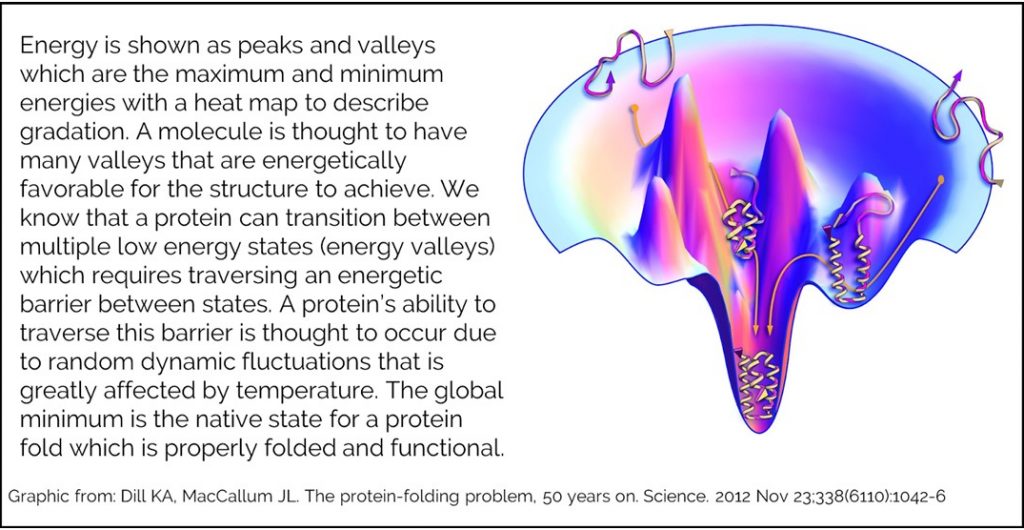 Our energy function cannot tell you whether you have reached the native state, but can guide you towards it. Testing has been done to measure how well our energy function does when attempting to model a native state. Creating a good model requires an accurate energy function and a robust method for sampling conformations. Rosetta labs have modeled many protein structures in attempt to recapitulate known native structure. During this process, they generate hundreds or thousands of structure that they rank by REU.They have shown that successful modeling will generate an energy funnel. The lowest energy structures are the most similar to the known native.

What are the components of the Rosetta Energy Function?

When Rosetta calculates the an energy score for a molecule’s conformation, it is actually calculating 12 different kinds of energy terms. 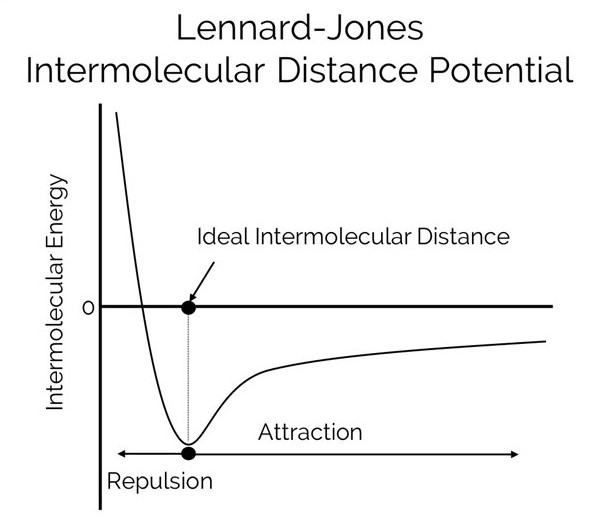 The LJ score is calculated as a sum of attractive and repulsive forces.

The repulsive component measures the short range repulsion which is also called Pauli Repulsion. The repulsion is driven by interaction of electron orbitals. This is often called a steric clash.

This is a statistic-based energy term. Torsion angle refers to the covalent bonds in the protein (excluding bonds with hydrogens). The backbone has three angles per amino acid which are called φ (phi), ψ (psi) and ω (omega) bonds.

The number of torsion angle bonds in a side chain is, of course, dependant on the size of the side chain. Glycine’s side chain is only a hydrogen so does not have any torsion angles. The C alpha is part of the backbone, so the first torsion angles refers the angle between this and the C beta. Subsequent bonds are named sequential with the greek alphabet. 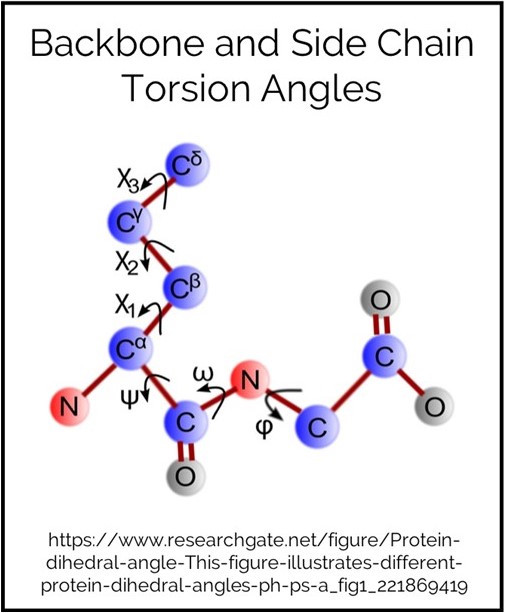 This is another physics-based score term. It measures the energy of noncovalent interactions that include a hydrogen. This is a partially electrostatic interaction. Since hydrogens that are a part of a covalent bond are slightly positive, they will be attracted to slightly negative atoms such as nitrogen and oxygen. While individual hydrogen bonds are relatively weak, there are a great number of hydrogen bonds in a folded protein, so this term can be a strong driving force behind protein stability. They are responsible for maintaining many kinds of protein motifs including alpha helices and beta sheets. 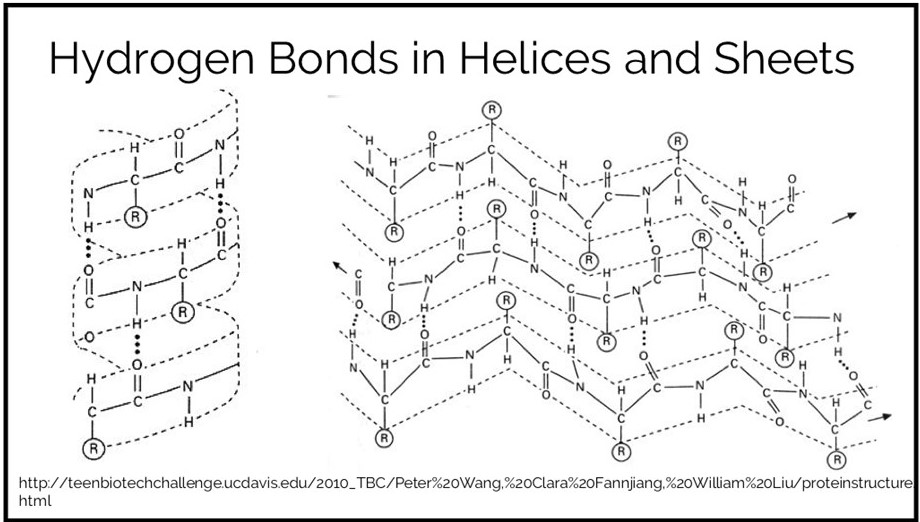 Rosetta does not include water molecules during modeling, so it has an implicit solvent included in scoring. This is called the Lazaridis-Karplus (LK) score and is a physics-based term. There is a penalty for buried polar groups and a favorable score is given to buried nonpolar groups.

How is the Rosetta Energy Function optimized?

Many research labs in the Rosetta community have done significant testing to optimize this energy function. This is done with benchmark sets, which are sets of structures with experimental data. Each set represents common modeling approaches for Rosetta including; recovering of native sequence starting from a known fold, recovering of native rotamers for a given backbone, discrimination between non-native modeled structures vs native, predicting ddG of point mutations, predicting loss of function.

There are several variations that are optimized for specific modeling cases, but the default energy function was designed to be broadly useful for diverse modeling tasks. Variation is controlled by giving a weight to each energy term. Weights are benchmarked, meaning they are testing to see what weights correlate with experimental data. With that in mind, the energy function used by Cyrus was sharpened by testing weights on the energy terms against several benchmark types in order to find a balance that is the most predictive for varied testing sets.

Individual features such as characteristics of hydrogen bonds or bond geometry were analyzed separately to see how parameterization of energy terms affected these features. For example, increasing the weighting for the hydrogen bond term could lead to a more accurate score for protein interactions, but make it less accurate for small molecule docking. All potential applications of Rosetta are considered in order to find the balance of weights that is most predictive across the board.

For a more detailed understanding of energy functions, we recommend these references…