The Cyrus DDG tool uses the Rosetta DDG calculation, which has a strong correlation to experimentally calculated 𝚫𝚫G. This method was tested using 1,210 mutations and had a correlation of r = 0.73. While Rosetta Energy Units (REUs) are not directly convertible to kcal/mol, a conversion factor has been determined that can be used for approximation. The DDG protocol has been shown to be the most predictive of the Rosetta protocols.

A DEEPER LOOK AT DDG FOR PROTEINS

H is the internal energy of a protein. H decreases during protein folding because folding will cause packing of hydrophobic residues, optimize polar group orientation, and achieve a good proximity to ideal bond lengths and angles.

S is the measure of order within a system. S of a protein becomes lower during protein folding because residue dynamics will be significantly decreased in comparison the unfolded state. However, decrease in protein S will also cause an increase in S for solvent.

The energy of an unfolded protein is nearly identical with a single point mutation. So, the dominant factor in DDG is the energy difference of the folded state. 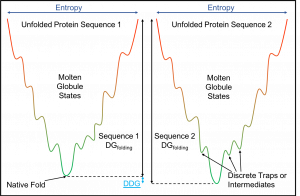 The diagram above is a simplified 2D energy landscape. The x axis represents different conformations of the protein. Energy of a protein structure is measured along the y axis. The unfolded states have the highest energy. In a 3D version, the many conformations that a protein can achieve are on x/z axis, so this translates to the Entropy of a protein at an energetic state.

Paths that follow the line down towards the global minimum represents conformational changes that occur during folding. The local minimas represent discrete traps or intermediate structures. Proteins must then jump the energetic hurdle to continue down the line in order to find the global minimum. In this example, sequence two reaches a lower minimum so is a more stable.

The program takes a structure and runs an optimization to sample nearby conformations. Each optimization starts by repacking the side chains, then does a gradient-based minimization three times. The first time has the repulsion term weighted at 10%, then 33%, then 100%, which allows more sampling in order to move through unfavorable transition states to find a lower minimum. Minor backbone changes are allowed during optimization. After 50 repeats using the same original structure, it takes the average score of the best three structures.

For instructions on how to run DDG please follow this tutorial.